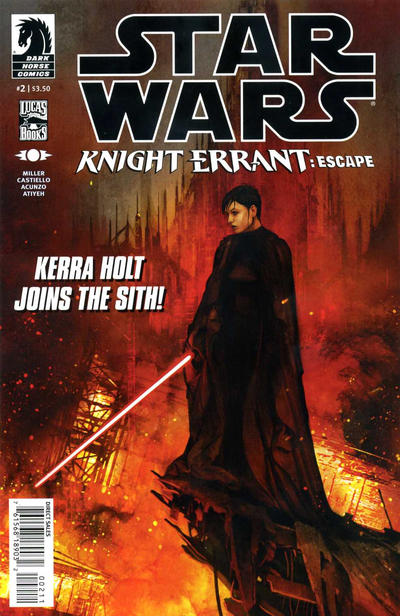 Working with a team of Sith reconnaissance troops searching for a powerful relic, Jedi Knight Kerra Holt is getting a firsthand look at the battles between warring Sith lords. Witnessing all the destruction is making her have second thoughts about her mission, but painful memories push her forward, overriding her conscience. Kerra is falling deeper into the world of the Sith—will she be able to climb out?

This issue opens with yet another look at the night 10 years earlier when Kerra lost her parents to Odion’s invasion. For the first time, we see what happened through Kerra’s eyes. We had seen the moments following Vannar’s arrival in Aflame #1, and we had heard about Kerra’s encounter with Joad in an issue of Deluge. Now, we actually see Kerra being told to flee by her parents — and for the first time, we see her parents there, themselves. In the following issue we get yet another look at this moment, from Odion’s point of view.

The Grumani Hierophants were a notion that came from Jason Fry and Daniel Wallace when we wrote the Essential Atlas Update for Knight Errant. It struck me that they would be an interesting group to tie into Kerra’s parents’ search for the Helm. While Aquilaris was Kerra’s home for a time, we never actually said for sure whether it was her birthplace. Her parents traveled there after having visiting Sarrassia, when they met Zoojoo and the other Grumani priests — and that visit was the source of Kerra’s pendant. We also realize from what Zoojoo tells us that Kerra’s parents must’ve been in Odion’s service for at least three years, which establishes enough time for the birth of her sibling.

As far as Kerra knew, she had no sibling — as her parents were assumed to have died in Odion’s attack. However, once it became apparent that her parents had lived, Kerra needed to come to terms with the fact that her parents never tried to find out what happened to her — or so she believes. Kerra’s family is just one more that’s been torn up by the Sith — and yet, here she is, trying to find them. She doesn’t give up.

This issue — and ones before it — drew comments from readers who noted that some of the technology and outfits were very similar to what showed up much later on in continuity. For the most part in the Knight Errant comics series, the designs have been the province of the artists — but they do follow a basic guideline, which is that the mode in Sith space is very much Star Wars Rummage Sale. The Sith are, to a large degree, inventing very little and stealing ships and uniforms (and the soldiers inside!) from each other and the Republic; don’t assume anything seen here came from the Sith themselves. Certainly Malakite invents nothing — and as we saw with Narsk in the novel, Odion goes after what he can get for no effort, too.

We do watch for things that shouldn’t be — a depiction of Dantooine once had us counting moons — but in publishing, sometimes the fix needs to be weighed against the impact of the appearance. You’d chance making a book late to remove a troop of Ewoks from a space casino, but maybe not to revise the look of generic ships in a single long shot.

“What your parents were doing here, they were doing for all children — not just the one they thought they lost.” — Zoojoo

It’s a coincidence that Mount Diligence has the same name as Jarrow Rusher’s spacecraft from the Knight Errant novel. Or maybe it isn’t: It’s entirely possible that Rusher’s ship, which was named after a ship from the Old Republic, itself was named after the mountain. Who knows?

We establish Glenk here as a member of the species we saw spying on Tatooine in the original Star Wars movie. Unsurprisingly, Glenk turns out to be in the same line of work.

The cover for Star Wars: Knight Errant: Escape #2 may be one of my favorite covers for all the comic books that I’ve done to date. It conveys all the emotions that I imagined Kerra Holt would have been having while in Odion’s space at this point in the adventure. Benjamin Carré’s cover art throughout the series is wonderful, but this issue’s cover is one of the best in my view.