“The story treatment for the next Star Wars movie! Sitting right there, on a dealer’s table in Memphis, Tennessee! 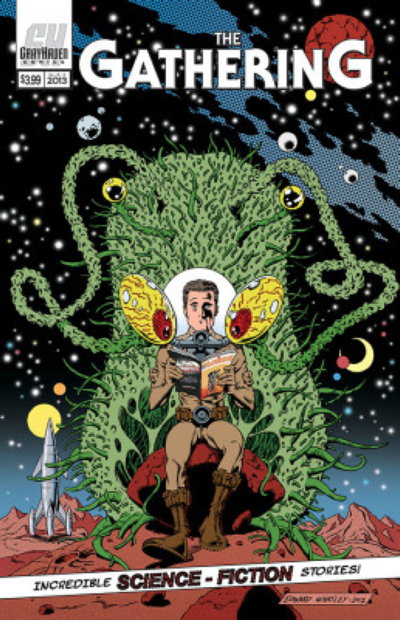 How I thought I had discovered the plot to the next Star Wars movie, fourteen years early…

The Gathering, a new-talent anthology for Gray Haven Press, had asked me for a couple of contributions, and I was happy to provide. This is the second of those stories.

I have rarely done any slice-of-life comics; my life’s just not that interesting! “Con Wrath,” however, qualified for the Sci-Fi issue by being about my experiences with a specific collectible: the “Fall of the Republic” story treatment— presumably for Star Wars: Episode III — that I purchased at a convention in 1984. The story followed how I came to realize it was fanfiction, which was not something teenage me had ever encountered.

“The truth was, I had discovered fan-fiction, in 1985. It had existed long before then, of course – I just wasn’t far enough into fandom to have discovered it yet.”

In perhaps the most delicious coincidence, this issue was in production when, seated aboard a plane headed to San Diego for Comic-Con in 2013, I had a long conversation with author John L. Flynn — whose name I immediately recognized as the author of “Fall of the Republic.” I was able to show him the digital pages from the comics story. John explained that the story treatment — as well as one he wrote for “Star Trek IV: The Trial of James T. Kirk” — were created as Christmas gifts the previous year, later making it into circulation in the convention where I found them. Small universe!

Due to the print-on-demand nature of the series and the time elapsed since its release, this is one of the few works of mine that I don’t have a physical copy of.