“Your excuses have become tiresome — and your usefulness is at an end.” — Darth Vader 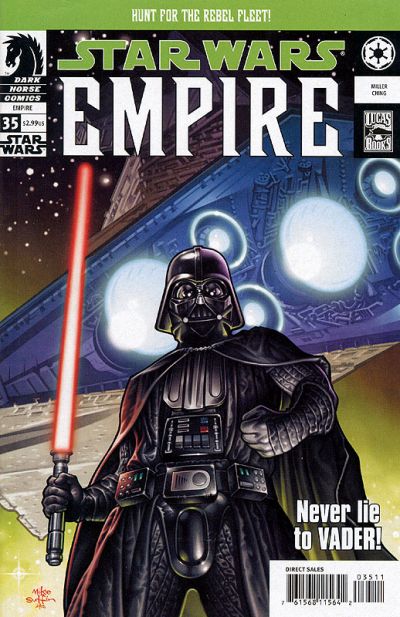 Having taken some time off following the end of my Iron Man run to get Comics Buyer’s Guide changed over from a weekly newspaper to a monthly magazine, I returned to comics writing in late 2004.

On vacation in Oregon that summer before San Diego Comic-Con, I had paid a visit to Dark Horse Comics, where I learned that Star Wars: Empire, the Dark Horse series set between Episodes IV and V, needed material. Later that year I pitched several stories, including one which I characterized as a “detective story — with Darth Vader as a detective.”

Editor Randy Stradley figured this would make a perfect interlude to the ongoing Jabiim story in the title, and slated it for what would wind up being #35. (Another of the stories, in somewhat different fashion, would wind up in Star Wars Adventures Annual 2018 many years later.)

Brian Ching, who had drawn Star Wars: Obsession, drew the story, which led directly to my being asked to pitch for the 2006 Knights of the Old Republic series. When I got the go-ahead to write the new title, Brian would join me on that as well. So, for a story that’s actually an interlude, it turned out to be pretty important for both of us!

While we had finished the issue much earlier, it didn’t ship until early October — so seeing the issue was a bit like reading the story for the first time for me. There are storytelling elements curious to Star Wars, and the issue taught me a lot about how to stage certain things. Without thought balloons, for example, it’s tough to depict someone “feeling something in The Force” — especially when the someone is in a mask, like Darth Vader. I worked in Knights of the Old Republic to stage such things with more clarity.

With Star Wars: Empire ending in late 2005, this was my one and only issue of the title.

“You’ve helped remove a traitor — and saved the Empire the trouble of dealing with the colony… forever.” — Darth Vader

I actually thought for a moment that I might have put Darth Vader on the wrong ship. But the flagship Super Star Destroyer hadn’t been commissioned by this point in the storyline.

Some have asked why I used female Rebel scouts in the scene with the Blockade Runner. Honestly, I figured we simply hadn’t seen many before, and with only a page to get to know these characters before they died, it provided a little variety. I never understood why the “red shirts” on Star Trek were almost always male humans…

Did you notice that this issue was just 28 pages, plus the cover — when comics have long been 32 pages plus the cover? The reason is that there isn’t any cover — it’s 32 pages of cover stock! I’m usually a traditionalist, but trading four ads for glossy stock throughout makes a certain amount of sense…