Here’s the rest of the responses to reader questions on the Star Wars: Knight Errant

novel. As before, I can’t get into anything specific that’s coming up in the upcoming comics — and I caution readers who have not read the novel not to go further without considering a Spoiler Warning attached, although these should be pretty safe.

Todd Selby asks: Is there an individual who considers him/herself absolute Dark Lord of the Sith or are the Sith too disjointed at this time?

I think it’s clear in the stories that they all think they’re the one that should have that title; we just haven’t seen anyone who actually says the term. And Daiman and Odion aspire to titles even more grandiose!

Keith “Nar” Kappel asks: In creating all these different Sith Empire cultures for the various enclaves, and the eccentric Sith Lord personalities that rule them, how much was influenced by research into other real-world empires, such as the Roman Empire, Alexander the Great’s Greek Empire, Napoleon’s French Empire, or other researched areas, and how much of it was just created from your own interest in things to see in the Star Wars Galaxy?

There’s a strong Alexander element with Daiman; my initial thinking for the look of the realm was a lot of Greco-Roman themes. Daiman thinks he’s living his own myth. In initial conception, Odion had more of a techno-barbarian feel, which made for a nice contrast with the Daimanate. Arkadia clearly drew on more Nordic themes — an Asgardian Athena, for want of a better term — with the idea of a structured, command economy built on top of it. So, yes, I’m always mashing up tidbits from here and there, and then fusing them with story opportunities that could only exist in Star Wars.

Loren Bickford asks: “Did any individual, real or fictional, influence the creation of Kerra Holt? Thank you for your time”

Well, Dark Horse editor Randy Stradley came up with the idea of a “lone female Jedi!” But I guess you mean a model for her character. There isn’t a single influence. I did some reading on Joan of Arc — as well as on spies and partisans who worked underground. Some of that obviously also influenced Narsk — in a sense, they’re in the same business of trying not to be seen doing what they’re doing.

Robert “Bob” Messing asks: “How on Earth did you come up with such a delightfully bizarre character as Vilia Calimondra?”

I get into a bit of that in the notes for the novel. Suffice it to say that this was a character that I had in mind from very early on — everything is built on the foundation she created. 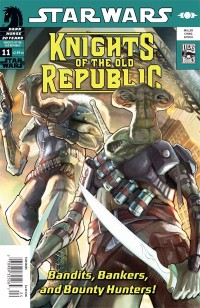 Hirogen Hunter asks: “Not exactly Knight Errant but I have to ask. Were the Moomo Brothers inspired by the Venithon twins?“

Since there’s an incredibly tangential connection to the novel — see the notes — it fits here. No, they were created completely independently; I hadn’t read the guide with the Venithons. Someone first mentioned that connection a few years ago, I think. Just a weird coincidence!

Jim Haley asks: “When Narsk is looking back and forth between Arkadia and Kerra (around their first meeting), I was wondering if he was seeing some family resemblance? With all the Sith blood running around this part of the galaxy and Kerra having hailed from here, was there any thought to her being related to Vilia as well?”

No — it’s a pretty big sector. And if you think about it in light of what we learn in the novel, I think you’d agree that that would be overkill!

Nehemoth asks: “Of course there are years between Knight Errant and the rise of Kaan but will we see some of the characters featured in Bane: Path of destruction, such as Qordis or Kopecz? Same for Kerra : is she alive in Bane area? Hundreds, even thousands of sith lords filled up the galaxy : what happened to them in the following years : we only see about twenty sith lords aligned with Kaan. Will we see more of the other Sith Lords such as Lioko and Malakite in “Deluge”?

These are all great questions, but as I noted at the start, I can’t speak to anything beyond what’s already appeared. There will be more news about the next comics series, Deluge, soon — watch for it.

OK, there are a few questions left that relate to the end of “Aflame,” so I’ll address those when I post the notes for #5. Hopefully very soon!

Again, thanks to everyone for their questions, and all the great feedback on the novel. Be sure to spread the word on the bookstore sites where you got the novel!

Novel copies are now on sale at all booksellers and at the following links:

• Barnes and Noble • Borders • Things From Another World
Post Views: 28